The first convoy of Australian troops to the First World War: Wartime Snapshot No. 15

The convoy was escorted by HMAS Melbourne, HMAS Sydney, HMS Minotaur and the Japanese battle cruiser HIJMS Ibuki, and included some thirty-eight transport vessels. The ships assembled in King George Sound in late October, loaded with men and horses of the Australian Imperial Force (AIF). Among the ships was the Orient liner Orvieto, which carried AIF commander, Major General William Bridges, and the newly-appointed official war correspondent, Charles Bean.

The convoy took on coal and water in preparation for the journey, then sailed from Albany on the morning of 1 November bound for the Suez Canal. By the time the convoy had formed up outside the harbour, it reached seven and a half miles (12 kilometres) in length.

'In no other port of the Commonwealth were the ships seen together … in the full magnificence of their numerical strength.'

It was expected that the convoy would take fourteen days to cross the Indian Ocean, but many were worried about the threat posed by the German raider SMS Emden. In a space of just six weeks the Emden, under the command of Captain Karl von Müller, had destroyed oil tanks at Madras and captured and sunk some twenty vessels, including the Russian light cruiser Zerntchung and the French torpedo-boat destroyer Mosquet. On the morning of 9 November, the convoy was near the Cocos (Keeling) Islands when it intercepted distress signals indicating that an enemy warship was approaching. HMAS Sydney, under the command of Captain John Glossop, went to investigate and sighted the Emden close to the islands.

The Sydney was faster than the Emden, and better armed, but Müller began with rapid and accurate long-range fire in the hope of inflicting damage quickly. The Emden scored hits on Sydney's control platform and range finder, causing casualties among the crew, but Sydney immediately retaliated and within forty minutes the Emden was riddled with holes and burning fiercely, with some 130 casualties.

Müller realised his ship was at Sydney's mercy, and he ran the Emden aground on the reef at North Keeling Island to save the remainder of his crew. The Sydney chased the Emden's collier, SS Buresk, which had appeared during the action, but the crew scuttled the ship before it could be seized. The Sydney then returned to the Emden and signalled to Müller to lower the ship's ensign, to concede defeat. A confused exchange followed and the Sydney again fired its guns at the wreck. Finally the ensign was struck, bringing an end to Australia's first decisive naval engagement.

The destruction of the Emden ensured safe passage through the Indian Ocean for the convoy, which reached Egypt safely on 3 December, 1914.

Use the poster, background information, historical sources and websites listed below, to answer the following questions: 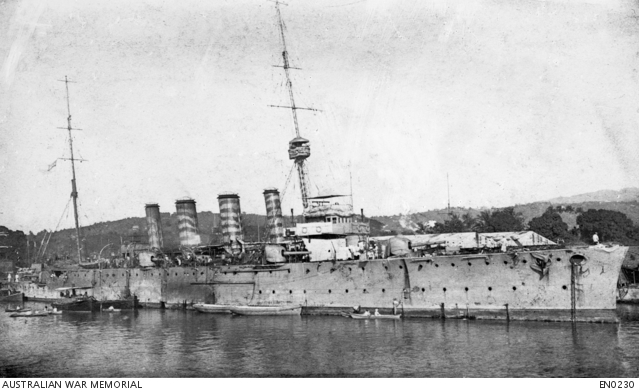 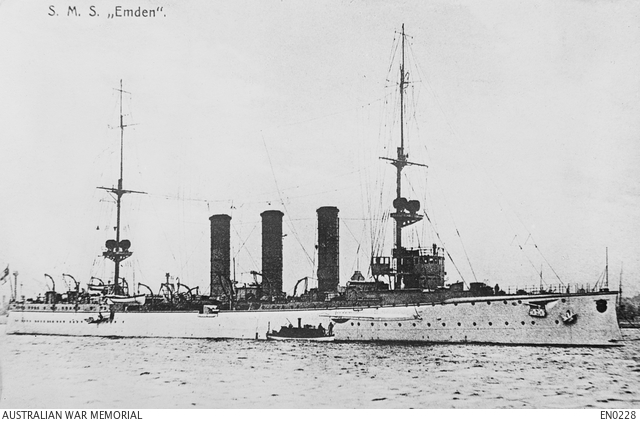 Later we turned again and engaged her on the other broadside. By now her three funnels and her foremast had been shot away and she was on fire aft. We turned again and after giving her a salvo or two with the starb[oard] guns, saw her run ashore on North Keeling Island. So at 11.20 am we ceased firing, the action having lasted 1 hour 40 min.

Original signed letter written by Captain Glossop requesting the captain of SMS Emden to surrender his vessel and crew following the beaching of the German ship on North Keeling Island. The letter was not actually delivered as the battle flag of the Emden was still raised when the Sydney returned from chasing the Buresk.

Part of the letter reads:

' … I have the honour to request that in the name of humanity you now surrender your ship to me … In the event of your surrendering which I venture to remind you is no disgrace but rather your misfortune, I will endeavour to do all I can for your sick and wounded … '
AWM 3DRL/3479

A signal log with the message 'Emden beached and done for', sent by Captain Glossop aboard HMAS Sydney following the destruction of SMS Emden on North Keeling Island, 9 November 1914.
AWM 1DRL/0660

Resources in this series

Ode of Remembrance: Wartime Snapshot No. 26

The Flanders Poppy—A symbol of remembrance: Wartime Snapshot No. 3

The Department of Veterans' Affairs recognises Aboriginal and Torres Strait Islander peoples as the First Nation Peoples of Australia and acknowledges their continuing spiritual, cultural, social and economic connection to Australia's lands and waters.

Aboriginal and Torres Strait Islander peoples should be aware that this website contains images, names and voices of deceased persons.